The Health Policy and Systems Research (HPSR) community in India and beyond is eagerly awaiting the roll out of the inaugural KEYSTONE course.  KEYSTONE is a nationwide HPSR capacity building initiative, coordinated and convened by Public Health Foundation of India (PHFI) as a Nodal Institute of the WHO Alliance for Health Policy and Systems Research (AHPSR) in India. The course is a collective initiative of several leading health policy and systems research institutions. A previous KEYSTONE related blog on this website highlighted the gaps in the Indian HPSR community and explored the ways in which Keystone is seeking to address them. The two-week course aims to help create a community of researchers with a good grasp of how and why questions and the capacity to address the role of contextual features in health systems functioning.

The course evolution and curriculum development followed a gradual, systematic and consultative path through a series of workshops and smaller meetings. Two committees have been developed out of the members of the core group and advisory group: a course promotion committee and a curriculum committee. 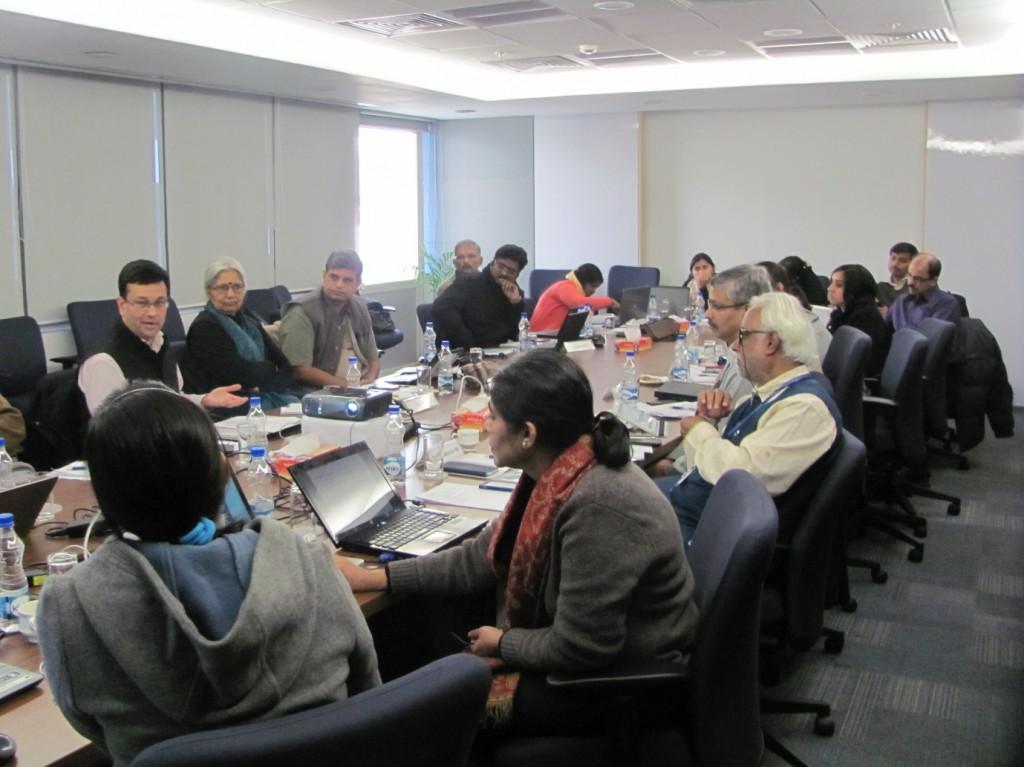 The course comprises an intensive two-week programme (23 Feb-5 March), with additional pre- and post-engagement through the open source learning platform Moodle. KEYSTONE aims to develop individual capacities and channel latent capacities of participants, for investigating and addressing real-world problems of health systems and policy, through rigorous immersion in current HPSR approaches, cross disciplinary approaches and frameworks. The course will emphasize the relevance of training and research for people involved in health system change. The ultimate goal of KEYSTONE is to activate a community of Indian HPSR researchers capable of addressing the critical needs of health system and policy development. Participants in the KEYSTONE course are predominantly mid-career level researchers, many of whom are in PhD programs; some participants are also working in health systems or civil society organizations. Participants are expected to have some research experience.

KEYSTONE learning outcomes include the capacity to frame HPSR questions, select appropriate research strategies for answering these questions, and think through strategies to support the use of research knowledge in health system decision-making.

The inaugural course has generated quite a stir and enthusiasm among the Indian HPSR community. Organizers received 77 applications from across disciplines (public health, medicine, geography, anthropology), sectors (academic, NGO, government health service) and geographies (eastern, western, northern and southern regions of India).The applications were reviewed by a group of 21 national and international HPSR experts who scored the applications on motivation of the participant to participate in the course, relevance of identified health system problem, level of HPSR related experience, language competency, and overall expectation of the candidate’s contribution to the course and to the wider group. The final selection was made by a core committee that also considered regions, constituencies, gender and how likely the candidate was to make use of the course.

As mentioned, the course starts on Monday 23 February,  so the final countdown towards KEYSTONE has really begun now, and the inaugural video for the course has already been launched. After weeks of preparation, staff and facilitators involved in the course will now move to the delivery of the course itself. The number of planning meetings and emails among core members seems to be increasing exponentially and the drive to create an Indian HPSR community is keeping the organizers awake throughout the night. Luckily, nights and skies in Delhi are pleasant now.

The Keystone faculty and facilitators are excited to facilitate the course for this diverse group of participants, which brings together government health services representatives from the national and district levels, activists from prominent NGOs, PhD students, committed academicians and practicing senior medical doctors. We will soon find out whether these discussions will most resemble a battlefield, chaos theory in practice, or the evolution of complexity with emergent patterns that the facilitators can bind together (our preferred scenario). Another question on many faculty and facilitators’ minds is that many course participants are mid-career – so one would have somewhat already framed their lenses to look at the health system. As this course introduces different lenses to look at health system problems, such as economic, policy analysis, ethnography, theory driven inquiry, and participatory action research, participants will be (gently) asked to move out of their comfort zones. This exposure to a range of research perspectives might result in lively discussion and critique of each lens (preferable) or instead, adherence to one lens that the participant finds more appealing or feels more comfortable with. Anyhow, faculty will have to devise mechanisms throughout the course to emphasize that the lenses are not incongruous but rather different ways to look at similar problems. (Here Keystone goes a touch Buddhist, we have to admit.)

Meanwhile, the administrative team is busy trying all permutations and combinations to make the course logistics comfortable and smooth. The course is set to be paperless and wi-fi enabled. With considerable challenges of selection of food menus (participants from northern, eastern, western and southern regions have very different food affinities and choices – in that respect there exists only one “truth” for most participants, a researcher’s stomach is less flexible than his/her mind) to selecting room partners, they are also juggling participant queries regarding travel and stay.

The stage is set for a theatrical performance with some greenroom preparation still going on. A vivid plan to subject KEYSTONE to a documentary film is being pursued. The actors (faculty and facilitators) are set to perform, and instead of applause at the end of their show they are hoping for curious questions and exciting debates throughout. So it’s a house full of positive radiant energy and enthusiasm to take the first step in developing and expanding the Indian HPSR community to shape and strengthen the future of Indian health systems.

We will keep the IHP readers updated on course progression, so stay tuned for other upcoming KEYSTONE blogs.