Climate change – a frightening reality: A short report from two conferences I attended in North America

2017: A year with multiple hurricanes of category 4-5 devastating Texas, Florida and the Caribbean islands; monsoon floods displacing millions and killing thousands in South Asia; record wildfires burning ~8.5 mn acres of land in the western US, leaving people around Oregon, Washington and California choking on dangerous levels of smoke; and Delhi being titled the world’s most polluted city with 40 times more polluted air than the WHO guideline for PM2.5 on a daily basis. Too much for the world to handle! 2017 is not just any year of extremes, but provides a glimpse of the cumulative impact of our uncontrolled climate-affecting actions over the past several years.

A second notice of “World Scientists’ Warning to Humanity” signed by more than 15000 scientists from 184 nations was released last week, stating that ‘we have unleashed a mass extinction event, the sixth in roughly 540 million years’. The notice revealed that since the first warning to humanity issued in 1992, there has been a dramatic increase in human population, annual surface temperature, carbon emissions, ocean dead zones, and a significant decline in fresh water availability on the planet. Due to a decline in ozone-depleting substances, the ozone hole reduction is the only positive change noticed, pointing towards the hope and possibility of controlling the ecological damage rate. This catastrophic warning is a strong reminder for us to take a step back and reflect on our behaviors and actions.

The two conferences I attended this fall, APHA2017 (in Atlanta) and CCGH2017 (in Ottawa) addressed the now increasingly relevant issues of climate change and its impact on health. APHA’s 2017 Annual Meeting was themed ‘Climate Changes Health’.  APHA declared 2017 as the Year of Climate Change and Health, and emphasized the need to bring together more evidence on how climate change is affecting human health. More than a hundred papers on this theme were presented at the annual meeting along with several roundtable discussions, social hours and documentaries screened at the Global Public Health Film Festival. APHA also took steps to ‘green’ its annual meeting by choosing a 27% more energy-efficient conference venue, promoting walking by contributing to the 2018 APHA 1Billion Steps Challenge, reducing the program booklet by three-quarters, creating reusable signage and building material and finally, and perhaps most importantly, removing the major fossil fuel and oil companies from its investment portfolio.

CCGH 2017 with the theme of ‘leaving no one behind’, also had a bunch of sessions and roundtables on experiences and lessons from conducting health research in crisis settings. Incidentally, the Lancet Commission on Pollution and Health also released the findings of its multi-year collaborative study on the economic and health impacts of pollution during CCGH 2017. The Commission reported environmental pollution to be the single largest cause of morbidity and mortality in low-and-middle-income countries, contributing to around 9 mn deaths worldwide in 2015, ~16% of the global death burden. In 2015, the highest number of pollution-related deaths occurred in India (2.5 mn deaths) followed by China (1.8 mn deaths). With many more chemicals yet to be detected and studied, the authors claimed these figures to be an underestimate of the actual health impact of pollution.

Climate change is fueling more frequent, intense and longer-lasting changes in the atmosphere (through rising temperatures and increasing concentration of pollutants in air, water and land). This is not only causing inconvenience to the people but is already killing them in large numbers. The population groups most vulnerable to these changes are, unsurprisingly, the economically disadvantaged households. Amongst these, people with disabilities/special needs, and the women and children are most at risk financially, socially, mentally as well as physically. Studies presented at both the conferences reaffirmed the increased rates of sexual assault and traumatic brain injuries post the disaster that are making these high-risk groups even more vulnerable. Thus, climate change deeply intertwined with poverty, poor health and social injustice potentially violates their basic human rights.

Not only is the impact of climate change spreading across different population groups, but what happens in some regions also leads to changes elsewhere, due to the interconnectedness. ‘Changes in your lands and water are changing my lands and water, a new building or a road in your community and the energy underpinning its new development comes from digging more oil and gas wells in my community’, said Rosemary Ahtuangaruak, an Inupiaq activist and environmental justice advisor from the Alaskan Wilderness League at the APHA 2017 closing session. This in a way also reflects the need to adopt a ‘systems approach’ in achieving the Sustainable Development Goals rather than working in siloes. However, it is still not clear (to most governments and scientists) how they need to deal with complex issues of the SDG era in a coherent and inter-connected way.

The disasters the world is currently facing and the increasing amount of conferences focusing on climate change underline the fact that key voices are uniting in their understanding of the impact of climate change on health, advocating to the countries and its people to take immediate action to mitigate the situation.

Each one of us needs to get engaged in this, as it is our collective responsibility to protect and hand over a safer planet to the future generations! 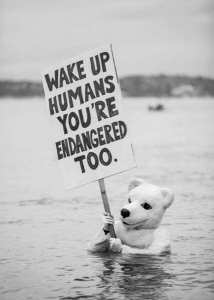