Subscribe
Home > blogs > A journey of friendship: how Alma-Ata made us young global health leaders
blog

A journey of friendship: how Alma-Ata made us young global health leaders 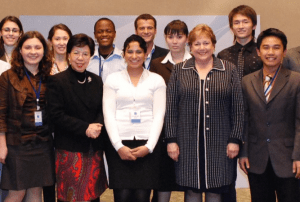 Roopa (center) and Renzo (far right) with WHO Director-General Margaret Chan (2nd from left), UNICEF Executive Director Ann Veneman (2nd from right) and other youth delegates during the 30th-anniversary conference of the Alma Ata Declaration in 2008

It has been 40 years since the adoption of the Declaration of Alma-Ata, which reaffirmed that health is a fundamental human right and that gross inequalities in health are unacceptable. We agree.

Ten years ago, we were medical students, and attending the 30th-anniversary conference in Kazakhstan helped us become young global health leaders. It was our first time to participate in a global health conference and we were honored to be selected by the International Federation of Medical Students Associations (IFMSA), a global network of more than a million medical students, as its representatives. Our attendance was supported by the United Nations Children’s Fund (UNICEF), which was the co-architect of the Alma-Ata Declaration along with the World Health Organization (WHO) back in 1978.

Along with the other youth delegates, we stayed in Hotel Kazakhstan, which was built four decades ago for the participants of the original Alma-Ata conference. Beside it is the main hall where more than a thousand delegates witnessed the Declaration being signed by more than a hundred national governments, sealing their commitment to make primary health care – essential, scientifically sound, and socially acceptable health services – accessible to all people.

During that week, we listened to panel discussions and met with public health leaders from around the world. We even had a closed-door roundtable discussion with Margaret Chan and Ann Veneman, then the heads of WHO and UNICEF. As youngsters, we were both new to the global health arena, but we saw ourselves leading the youth delegates to draft a statement calling for meaningful participation of young people in strengthening primary health care around the world. 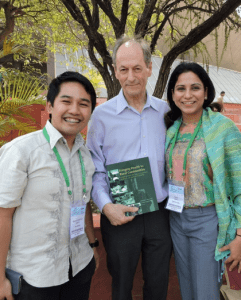 Renzo and Roopa with Professor Sir Michael Marmot, chair of the WHO Commission on Social Determinants of Health

While we were both students and thus neophytes to global health during that time, we both understood early on that we were there as spokespersons for the world’s youth and therefore should not allow ourselves to be victims of tokenism. We did not want our involvement in global health and the promotion of primary health care to end in Alma-Ata. Hence, we made a personal commitment, not just to remain connected after the conference, but to spread the messages of the conference to fellow young people globally and take on some serious global health challenges moving forward.

We both moved on to become leaders of our respective national medical student associations (American Medical Student Association and Asian Medical Students Association-Philippines), co-organized workshops in several countries, from Jakarta to Geneva, on topics as wide-ranging as the social determinants of health and global health diplomacy, and later assumed leadership roles in IFMSA as president (Roopa) and envoy to the WHO (Renzo), working together to advance youth participation in global health policy.

Ten years later, we are still in the frontlines of global health and there are no signs of stopping. In fact, we are only beginning our journey towards active engagement in global health – not as young students but as young-at-heart professionals imbued with youthful energy and optimism. The vision of Alma-Ata to achieve “Health for All” by year 2000 has already been long overdue, but new global health challenges have evolved, making our mission extra difficult. 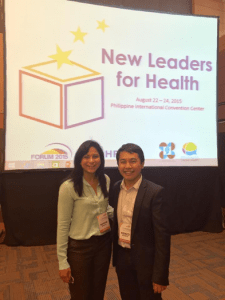 Having experienced first-hand the challenges of being an emerging woman leader in the global health field, Roopa launched a global movement – Women in Global Health (WGH) – to shift the narrative from women as beneficiaries of global health initiatives to women as leaders and change agents of global health transformation. Global health delivery is diminished by gender inequality – ideas, innovation, expertise and talent are lost. With nearly 10,000 supporters from 70-plus countries, WGH is working to transform today’s environments such that all genders, especially women can thrive and reach their maximum leadership potential. Today, the movement continues to spread around the world, with the new annual conferences, high-level reports, and even major reforms in the leadership composition of the WHO cabinet.

Meanwhile, coming from one of the most climate-vulnerable countries in the world, Renzo has taken on the challenge of transforming health systems worldwide to become more resilient in the era of climate change. He has grown into one of the freshest voices in the emerging field of planetary health, working hard to build bridges across disciplines, sectors, geographies, and generations in advancing the health of both people and the planet. At present, he serves in the editorial advisory board of the new journal The Lancet Planetary Health, is finishing his doctoral thesis on building climate-smart local health systems in the developing world, and is now establishing PH Lab in the Philippines that will generate innovative solutions for the world’s pressing public health and planetary health challenges. 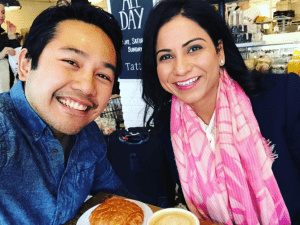 When we both set foot in Alma-Ata ten years ago, we had no clue that it would be a launching point for us for an exciting journey in global health – one that would be parallel but at many times intertwining. For instance, the Declaration did not highlight the importance of women participation in primary health care, and it mentioned environmental concerns only in passing, so in a way, we both reinvented Alma-Ata. We claimed it as ours and made it relevant to the changing times since women continue to be undervalued and as the planet endures a slow-burn crisis – both of which are detrimental to the future of global health.

Ten years hence, on the Declaration’s 40th anniversary, we both return to Kazakhstan, this time in its capital Astana, to convey our energy and passion to a new generation of young primary health care leaders. New declarations may be made, but we still carry in our hearts the lessons we learned from Alma-Ata and reaffirm the promise we made – to do our part in making “Health for All” a reality within our lifetime.

Both Renzo and Roopa are alumni of the Emerging Voices for Global Health (EV4GH) program.

Roopa is Co-Founder and Executive Director of Women in Global Health and former President of IFMSA.