The 60th ITM Colloquium – Were the dots connected?

As its overall theme stated, the 60th ITM Colloquium hoped to “connect the dots” between some of the most pressing needs in tropical medicine and international health.  The venue, “de Zuiderkroon” in Antwerp, was certainly inviting. The main focus of the two-day conference (9-10 October), also labelled ‘One Health. One Future. One Planet’, already gave the audience a fair idea of what was in store. The structure of the sessions gave them another hint, going from ‘The Future is now’, ‘Global Challenges’, to ‘Innovation in health’, and of course also ‘Collaborating with ITM’. As we walk you through the various keynotes and panel sessions, we will try to connect the various speakers and discourses. So, in a way, connecting some of the colloquium ‘dots’ ourselves.

First of all, Her Majesty the Queen of the Belgians, Queen Mathilde, who is also a Sustainable Development Goals (SDG) champion, opened the occasion by declaring, among others, that there is “no good health without mental health.”  More than timely, as Day 2 of the conference coincided with World Mental Health Day, and mental health is – at last – rising on the global health agenda. (True, 10 October also happened to be World Sight Day, but The Lancet has taken care  of that by now. )The next speaker, Antwerp governor and ITM board chair Cathy Berx, expressed in her welcome address her deep appreciation to the broad ITM community for their dedication to ensuring that there is health (care) for all worldwide.

Inclusivity is a key concern of the global health fraternity nowadays, and for good reason. The keynotes and panel discussions were certainly gender-balanced (i.e. no ‘manels’  were spotted, let alone a ‘manference’), and in terms of generations, there was a good mix of both ‘emerged’ and ‘emerging voices’ (some literally were alumni of the Emerging Voices for Global Health, a program incubated by ITM in 2010, which is currently recruiting for its 2020 cohort). There was also a huge presence of ITM partners from the Global South, particularly from Africa, Asia and Latin America. So the dots between different generations, genders, North and South, and between ITM & its partners/alumni were certainly more than connected at this event.

In a way, one could also consider the speeches from the two directors as a prime example of ‘connecting the dots’ (at ITM level). Indeed, both the outgoing director (dr. Bruno Gryseels) and the incoming director (dr. Marc-Alain Widdowson) took the floor on day one, whereby the latter emphasized how many initiatives have already been started by the former director, as he passes on the baton. The two speeches, a farewell address and a welcoming one, certainly drew some extra audience to the colloquium.  Bruno Gryseels, in his final address to ITM and the broader global health community in Belgium and beyond, discussed – after sharing some of ITM’s long history – his 24-year tenure marked by significant achievements in education, research, and partnerships. As for the latter pillar, a core feature of ITM’s work around the world, he rightly applauded ITM’s initiative to try “Switch the poles”, even he admitted that’s arguably not always easy. Later that afternoon, the new ITM Director Marc- Alain Widdowson shared his journey so far, and then laid out his vision for ITM’s future, from addressing complex diseases to tackling climate change. “The Earth is the biggest dot,” Dr. Widdowson remarked at some point. Perhaps it is time for ITM to add a fourth ‘P’ to its well-known threefold focus on ‘pathogens, patients, and populations’ – the planet?

Earlier that day, Nafsiah Mboi, Indonesia’s former minister of health and ITM alumna, had dwelled on the many current global challenges in public health, among others nailing it with the following quote: “the enemy of public health is remaining in the status quo”.

Ngozi Erondu, Chief Executive, Project Zambezi, then brought up a different angle with her bold talk entitled “Tired of tokenism. Towards local ownership and representative leadership in Global health” which built on the recently emerging discourse around #DecolonizeGlobalHealth. Her message focused on a call for greater diversity and inclusiveness in global health institutions, particularly schools of public health, and the need to develop trust and meaningful partnerships between scholars from both Global North and South, from writing articles to implementing projects. In the Q&A afterwards, Dr. Gryseels then asked a rather pertinent question – if global health as a field and paradigm is rather “colonial”, isn’t it therefore hard to “decolonize”?  This debate must continue.

The following day, Prof. Koen Peeters, the head of the anthropological unit at ITM, discussed in his talk on ‘ambiguous research practices in global health science’ the difference between “real” and “fake science” and how to draw the line with genuine fake data.  Among others, he questioned the scientific process of data collection. Key message: all involved in the research should go out and collect the data to understand the complexities and ambiguities of asking participants questions.  One of the examples he gave: for a participant who didn’t have a meal last night, would you ask them if they had a meal even if you are aware of their situation?  The reality could be in fact that the data collector prefers to sit under a tree, filling in the information him/herself. The flip side is: what if he/she does ask the question, however, and the participant gives a false answer, not feeling comfortable to tell the truth? The big question is thus: which information is authentic?  There was a notable silence in the room at the end of his speech – I guess people were contemplating and eager to look back at their own reports and publications.

After taking a deep breath, Diana Pou Ciruelo gave a presentation on migration through the Mediterranean, displaying pictures and statistics throughout her talk. The at times horrifying pictures (she had warned about the disturbance they might cause) explained the health challenges and main risks faced by immigrants. And still so many are determined to arrive at their “destination”, trying not to think about the very real risk of dying in the Mediterranean, all this “in search of a better life”…  Among others, she dealt with the wrong perception existing in some circles that international non-governmental organizations play a ‘facilitating role in immigrant movement. The next session involved a panel discussion on the many links between climate change and human health. The quest for more knowledge on how to tackle these rapidly increasing global health challenges was affirmed by the doctors, who admitted they weren’t really in the loop (yet) on global climate health discussions. They would thus like to join the conversation sooner rather than later. Somebody from the audience then asked the following question to one panelist: if all doctors were to become climate change activists, where would you still get advice on your health?  We let you guess the answer 😊.

Thereafter, John Nkengasong, Director of the Africa Centres for Disease Control and Prevention (and also an ITM alumnus), in a keynote themed ‘Disease threats in 21st century Africa and the need for a new public health order’, highlighted Africa’s current challenges and emerging threats in public health.   He zeroed in on Africa CDC’s strategic framework that explicitly  tackles these various agendas and emphasized the need for continued partnership with ITM. Nkengasong also pleaded for a change in approach when it comes to deciding health priorities, among others, arguing for a shift (or at least re-balancing) from the (over-saturated?) focus on HIV and TB to neglected ones such as plague in Madagascar. He also discussed the importance of articles published in the Journal of public Health in Africa.

Moving on, new challenges emerged from a next panel, zooming in on natural catastrophes (volcanic eruptions, earth quakes, … ). These are the issues that aren’t clearly planned for, yet seem to hit hard, when they do hit. With respect to these, the biblical quote comes to mind, “do not worry about tomorrow, for tomorrow will worry about itself. Each day has enough trouble of its own”.  But this biblical quote no longer pertains, at least in 21st century global health – it’s key to boost preparedness in a number of areas.  Sluggish action and lack of political will to enact and enforce policies were also mentioned, more specifically, to tackle industries associated with health risks that are leading to a rise in non-communicable diseases. The “commercial determinants of health”, as they are also known. By now, some countries have unintentionally introduced the following “version” of Universal Health Coverage –  “Universal coverage of junk food”, with the health implications you can imagine.  Ama de-Graft Aikins, British academy Global professor (UCL), reiterated the need to address NCDs in a pluralistic way. Community engagement is of course also key, and it’s absolutely vital to not leave the men and children behind in this battle against NCDs.

Lastly, during the Wednesday afternoon panel debate on innovation in health care, Ibukun Abejirinde  concluded that “innovation is common sense, it doesn’t always have to be digital”. And to the innovators from the Global South, she stated, “We should encourage funders to put their money where their mouth is: let us find our own solutions to our problems. Because very often, we have the solutions, we just may not have the resources to develop them.” Indeed, in the end, for innovation to be successful, there are requirements: in terms of funding, capacity building and patience.

By the time the two-day colloquium was wrapped up, there was a general sense that indeed quite some ‘dots’ had been connected and silos bridged. No doubt, in the SDG health era, connecting dots needs to be an ongoing effort, but this was certainly a great start. Last but not least, a nice spin-off of all these ‘connecting the dots’ discussions materialized: by the end of the event, the continued relevance of ITM in the 21st century, another key theme in many interventions and questions, had become clearer as well. 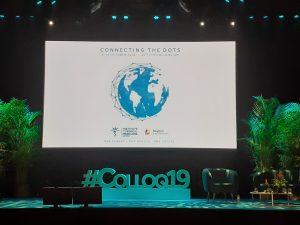