I had preconceived ideas of what to expect at the 60th Colloquium of the Institute of Tropical Medicine themed “Connecting the Dots – One Planet, One Health, One Future” in Antwerp (9-10 October). I was ready for stately speeches from the Queen of the Belgians and seasoned global health experts expounding hot-button global health issues like the recent UN High level meeting cementing UHC for the underserved as a major key, climate change and health, innovations in health technology, etc. I got this, of course (I mean it was a global health conference, after all), but what I did not expect to get was the open, honest and frankly ‘table-shaking’ discourse that ensued on this platform. My expectations were met and then surpassed. These were conversations that I did not know could be had in forums like these, but they were needed and now at the end of the conference, I see this is a good thing and I’ll tell you why.

But first, let me highlight that the first two keynote speakers on Day 1 were both women from the Global South, so it was obvious from the start that a clear message was being carefully curated and by the time we had heard them both speak, the message was loud and clear. Indonesia’s Former Minister of Health and former ITM Alum, Nafsiah Mboi’s dropped this memorable quote, “Satisfaction with the status quo is the enemy of Global Health”, followed by Global Health Policy Expert Ngozi Erondu’s bold and assertive talk titled “Tired of tokenism – towards local ownership and representative leadership in global health”, in which she urged true collaboration between the Global North and South with guilt-free discussions about the past and future of global health. She stated all this against the backdrop of the #decolonizeGlobalHealth debate.

By then participants were ready to be ‘uncomfortable’, step into the fray, not just for the sake of disruption but to challenge ourselves as evidenced by the conversation that followed in a short Q&A with the audience, managed expertly by the ‘master of ceremony’, Dalilla Hermans. There was earnest audience participation with questions that challenged both the speakers and the listeners. This evolved further into little circles of conversations among participants with questions like these popping up: “How do I propose and intervene genuinely without whipping up ‘saviorism’ complexes and sentiments?”, “Is the Global South rising to the challenge being set upon it by this arising discourse?”, “ How do we define Global Health to truly mean health of the whole world instead of it being code for tropical diseases?”

I believe this type of conversation is the answer to the question of what this meeting and others like it (aim to) achieve. Aside from being a forum where questions like the ones above can be earnestly discussed, I see that what it does is create space for new categories in our thinking in very subtle, almost imperceptible ways. This forum focused firmly on people being the connecting dots in global health. In our work, our daily rigor forces us to emphasize statistics and interventions, with intense focus on constantly innovating. To this issue of relentless pressure to innovate, Chris Seelos of Stanford University, in his keynote address on Day 2, firmly put people at the center again by stressing the point that innovation must be about the common sense of knowing people’s needs, not just about the newest tool. 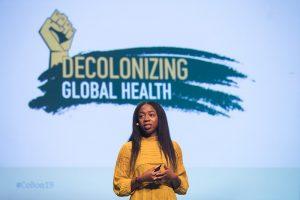 The age of scientists, doctors, researchers and academia solely as pragmatists is slowly being phased away, and rightly so. Till recently, idealism and optimism had to be carefully tucked away to give way for the practical and the rigor of pure science. While these remain evidently very important, now we are being called to more. In a keynote on Day 2 of the colloquium, Koen Peeters discussed how setting aside local context and global standardization of health interventions creates a kind of misdirection and pseudo-science. Diana Pou Cirelou then silenced the room with her poignant speech stating that the issue of migration must be met with humanity urging researchers to dispel the fear around migrants being ‘disease-carriers’ and urging scientists not to relent in using research to fight the lies around the presumed ‘pull-effect’ of rescue efforts for illegal migrants. There was a clear call to assert our hearts and intellect fearlessly into our science.

As Marc Geenen introduced a new book currently being written about ITM (in a short interview together with former ITM Communications head Roeland Scholtalbers on Wednesday afternoon), he said something I found to be profound: we need charismatic and passionate people who are willing to make themselves superfluous both in the Global North and South. This again echoed in the keynote speech by the Director of the Africa CDC (and also ITM alumnus), John Nkengasong, calling for people who can define their own narrative and begin to chart a course to change it.

In all, our path to meaningful progress will be paved by moments like this where we are spurred on by fresh convictions to devote our work to connecting the dots towards a healthier future.

Dr. Helen Anyasi is a gender enthusiast, a SESHGlobal Crowdsourcing contest Awardee to the WLGH'18. She works with FHI360.