The Expanded Programme on Immunisation (EPI) is one of the most cost-effective public health interventions for reaching the newly-set Sustainable Development Goals. It can help ascertain the level of reduction of child morbidity and mortality in countries with poor performing health statistics, such as those seen in sub-Saharan Africa. There is a need to evaluate the level of coverage for basic childhood vaccinations and geographical variation of the vaccines utilisation, and use this information to identify the “hotspots of low performance” among sub-Saharan African countries, especially for the time period of the years just preceding   the end of Millennium Development Goals initiative.

In low-resource setting such as those of Sub-Saharan African countries identifying hotspots of low performance, can be an important way to prioritize weaker across the subnational regions and the countries. This can enable the health system to focus their national level resources, as well as aid in the spending of external international funds and resources. Understanding the gaps in service delivery by using EPI coverage as an indicator may also lead to changes in various healthcare policies especially in terms of resource allocation and distribution with respect to immunisation programmes in these countries.

I would like to illustrate this with the example of a review that I partook in and   looked at the data from the Demographic and Health Survey (DHS). The DHS is a population-based cross-sectional study and we looked at data from 28 sub-Saharan countries within the time frame of 2010-2015. Analysis of the data gave us an overview on vaccination coverage in these countries. Findings from the survey did not present an appealing picture with the basic vaccination coverage ranging from 24.3% in Ethiopia to 90.1% in Rwanda. On average, West African, Central/East African and Southern African sub-regions recorded 57.2%, 56.2% and 69.2% vaccination coverage respectively. There were no significant differences among the three sub-regions in terms of vaccination coverage. Congo (Brazzaville), Congo Democratic Republic, Cote d’Ivoire, Ethiopia, Gabon, Guinea and Nigeria had regional hotspots of poor performance. Affar and North West regions of Ethiopia and Nigeria had the lowest performance at less than 10%. However, 11 of the African countries had at least a subnational region with a high level coverage.

The DHS and STAT complier provided useful data for the evaluation of immunisation coverage in Sub-Saharan countries. The combined use of statistical and geographic system analysis contributes to better understanding of the geographical disparity and identification of poor performing areas for vaccination coverage among the sub-Saharan African children. In general, geographic system analysis can help locate and identify where different types of diseases are found, the relation of diseases to the environment and the health seeking patterns of the population. These findings can be very useful for customising intervention strategies for the subnational regions and countries. Indeed they can also be useful to monitor and identify regional variations over time and any significant changes in patterns which might be worth addressing early on.

Mapping hotspots is only one part of the process to bringing about change and can be of use for mapping of other diseases of public health interest globally. We plan to facilitate the translation of these findings to policies by interacting and sharing these with policy makers at various decision making levels. The sharing could be achieved by communicating with the policy makers on their social media platforms, preparing a fact sheet for easy reading and targeted advocacy especially at policy makers from the hotspots. We hope these findings will help in channelling needed resources to the hotspots.

Image: Percentage of children 12-23 months who received all 8 basic vaccinations in sub-Saharan Africa (at sub-national level) 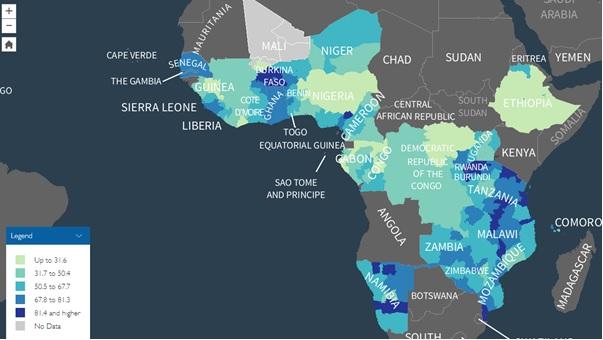 Olatunji Adetokunboh is a physician and public health researcher. He is currently a Team Lead/Programme Advisor with the South to South Programme, Stellenbosch University, South Africa. He has vast working experience in HIV, TB, Reproductive Health and Primary Health Care programmes in sub-Saharan Africa. He was recognised in 2013 by UNICEF as Children and AIDS visionary, also an EV2013, HIVR4P and IEA Scholars. He is actively involved in PMTCT, children ART and immunisation researches.